For anime lovers, how are you all? Every anime lover must crave his favorite anime figure, there are even some people who are deliberately collecting some items that he loves.

But now, have you known about some of the advanced technology items that have arisen because of the inspiration from Anime? It’s interesting, isn’t it? From technologies like holograms, robots and so on.

Without Long words, just let us peel thoroughly about 7 Sophisticated Inspiration Technology From Anime, along with the info:

First – pets or robotic animals, like the Zoid anime. In anime, robots like this can fight and so on. However, it turns out that there are robots with animal shapes that are used as a medium to save victims in disasters or as robotic innovations.
An example is an animal robot created by Boston Dinamics, a robot like this can walk, run, and jump like a dog. In addition there is also a robot from the Sony company called Aibo Robot. This robot was made to replace a real dog.
Interesting right? For you animal lovers, you can try to have this Robot Dog.

Second – Android robot. The second advanced technology is a robot inspired by several anime such as Battle Angel Alita, Chobits, and Ghost in the Shell.
This Android robot depicts a robot that is capable of doing many things like humans. One example of a robot in the real world is Erica. That said, the Android Robot Erica is able to talk to humans. This robot is a Japanese product. 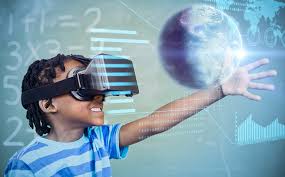 Third – Sword Art anime, no stranger to this one anime. This VR technology has been made since the 1990s with the advent of SEGA VR.

In the anime the game is told to use VR. Then in 2010, Oculus Rift emerged, which is a VR equipment with advanced features. This technology has penetrated to the world of video and map technology development.

Fourth – Hologram. In addition to using electronic clothing technology, Psycho-Pass also applies hologram technology. Hologram technology is in the real world with the name Gatebox that you can buy online. The character in the hologram is named Azuma Hikari.
A beautiful and charming hologram that can make anyone want to collect it. Fifth – Big Robot. Gundam, no stranger to this one anime figure. Anime that has a characteristic that is a big robot. Good news, now comes a large robot produced by Japan, named LW-Mononofu. Its size can make this eye wide open because of its very large shape.

Sixth – Bionic Arm. If you often watch the Fullmetal Alchemist anime, it’s certainly no stranger to Edward’s bionic arm. Bionic Arm has technology that is very sophisticated and can be used by patients. This became a breakthrough for the medical world to deal with the problem of disability in the limbs and arms.
With these interesting ideas and results, hopefully they will be used for good.

Seventh – Synthetic Food. Not only an item that is currently being developed in the form of technology. Because so far synthetic or artificial foods have emerged that will later be used as human staple foods.This synthesis food was inspired by anime Loups = Garous.
Some of the reasons for creating this synthetic food are to avoid spreading viruses. As well as synthetic food in the form of meat, it is said that it will become a future food when food raw materials are difficult to obtain. One of the scientists who created this synthesis food is Mark Post.

Here’s an interesting discussion about technological developments inspired by the world of anime. Hopefully useful and always successful.

How to use WinToFlash to make bootable windows

8 Best Alternative Chat Applications For Your Mobile, You have to try!